The Insanity Defense: Coming to terms with Ezra Pound’s politics / Evan Kindley in: The Nation

In December 1945, Ezra Pound was committed to St. Elizabeths Hospital in Washington, DC. He was then 60 years old, internationally famous, and under indictment for treason against the United States. In an infamous series of broadcasts made on Italian radio between 1941 and 1943, Pound had declared his support for Mussolini’s regime and his contempt for the Allied forces. He parroted fascist talking points but also added a layer of byzantine anti-Semitic conspiracy theory all his own. “You let in the Jew and the Jew rotted your empire, and you yourselves out-Jewed the Jew,” he admonished the British on March 15, 1942. In other broadcasts, Pound spoke of “Jew slime,” warned of the white race “going toward total extinction,” suggested hanging President Roosevelt (“if you can do it by due legal process”), praised Hitler’s Mein Kampf, and urged his listeners to familiarize themselves with The Protocols of the Elders of Zion.
Pound had arrived at this vicious ideological position gradually. His early work, while always concerned with the relations between art and society, had rarely been political per se. Over the years, though, his long poem The Cantos, started in 1915, had drifted from a preoccupation with mythological subjects to an investigation of economics and governance, influenced by heterodox economists like C.H. Douglas and Silvio Gesell. By the time the Second World War began, Pound had come to blame the practice of usury, propagated by a secret network of nefarious Jewish bankers, for all the evils afflicting the world.
After relocating to Italy in 1924, Pound became an ardent supporter of Mussolini, who he believed shared his economic views. He collaborated with the regime right up until the fall of the Nazi-backed Republic of Salò in April 1945, when he turned himself in to American military officials, and spent months in a detention center in Pisa before being extradited to the United States and eventually institutionalized at St. Elizabeths, the nation’s oldest federally funded mental hospital. ... [mehr] https://www.thenation.com/article/coming-to-terms-with-ezra-pounds-politics/
Eingestellt von HoHi um 08:44 Keine Kommentare:

What does she think she looks like? / Rosemary Hill in: London Review of Books

This isn’t an essay about clothes, exactly, nor is it about fashion, quite. It is about women and clothes and something that happens between them that we could think of as a kind of third rail of female experience. I’ve thought about this for some time but my thoughts were focused when I saw Isabelle Huppert in Paul Verhoeven’s 2016 film, Elle. The film begins with a rape about which the victim, Huppert, is ambivalent. This sent the critics, particularly male critics, scuttling to and fro wondering whether it was a feminist, post-feminist or anti-feminist film, or just in some baffling way French. In the Guardian, Peter Bradshaw went for ‘provocative’, before deciding it was a ‘startlingly strange rape-revenge black comedy’. I didn’t think it was as strange as all that and I did think it was funny, but what really struck me was that every woman I knew who had seen it was mesmerised not by the ‘issues’ but by Huppert, and not just for her acting – she’s always good – but for what she wore: ‘the clothes’, women said to one another, were ‘amazing’. Yet when you look at them in stills they aren’t amazing, they are the epitome of French ready-to-wear chic. So if it wasn’t the clothes or the actor that created the effect, it was some compound of the two that created a character, a presence able to walk the tightrope that carries the film over the fire pit of sexual violence and women’s agency. ... [mehr] https://www.lrb.co.uk/v40/n07/rosemary-hill/what-does-she-think-she-looks-like

Nadeem Ahmad Siddiqui is holding court with a group of friends and regulars at his Islamabad bookshop, Jumbo. The jovial chatter and tea drinking is broken up every so often by a customer seeking Siddiqui’s help. One child is gently admonished to find something more stimulating to read, while a question about medical textbooks from a mother and daughter soon turns into an animated discussion about India-Pakistan relations. 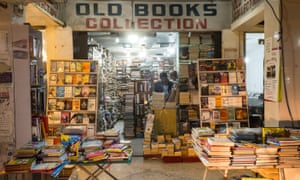 Tucked away in the corner of a busy commercial sector, unassuming Jumbo Books has iconic status among Islamabad’s “old bookshops”, as secondhand book stores are known here. Once the nondescript doorway is located among the swanky new restaurants and fashion boutiques of Pakistan’s capital, the visitor takes a staircase down to a concrete basement. Inside are shelves piled high with rare antique books, philosophical tomes and contemporary literature.

When Islamabad was built as the capital of a newly independent Pakistan, it was the “old bookshops” that gave the neighbourhoods a spirit and character beyond the insipid soullessness that pervades purpose-built cities. ... [mehr] https://www.theguardian.com/cities/2018/mar/28/final-chapter-the-slow-death-of-islamabad-secondhand-bookshops
Eingestellt von HoHi um 01:46 Keine Kommentare:

In the Endless Sameness of Prison, Writing Kept Me Human

It is past midnight, December 12, 1978. Unable to face the prickly bristles of three see–through blankets on a mattress whose sisal stuffing has folded into numerous lumps hard as stones, I am at the desk, under the full electric glare of a 100–watt naked bulb, scribbling words on toilet paper. I can hear the bootsteps of the night guard, going up and down the passageway between the two rows of cells, which face each other.
Mine is cell 16 in a prison block enclosing 18 other political prisoners. Here I have no name. I am just a number in a file: K6,77. A tiny iron frame against one wall serves as a bed. A tiny board against another wall serves as a desk. These fill up the minute cell.
One end of the passageway is a cul–de–sac of two latrines, a washroom with only one sink and a shower room for four. These are all open: no doors. At the other end, next to my cell, the passageway opens into a tiny exercise yard whose major features are one aluminum rubbish bin and a decrepit tenniquoit–cum–volleyball net hanging from two iron poles.
There is a door of iron bars at this opening—between the exercise yard and the block of cells—and it is always shut and locked at night. The block of cells and the yard are enclosed by four double stone walls so high that they completely cut off the skyline of trees and buildings, which might otherwise give us a glimpse of the world of active life.
This is Kamĩtĩ Maximum Security Prison, one of the largest in Africa. It is situated near three towns—Rũirũ, Kĩambu, and Nairobi—and literally next door to Kenyatta University College, but we could as easily be on Mars. We are completely quarantined from everything and everybody, including convicted prisoners in all the other blocks, except for a highly drilled select squad of prison guards and their commanding officers.
Maximum security: the idea used to fill me with terror whenever I met it in fiction, Dickens mostly, and I have always associated it with England and Englishmen; it conjured up images of hordes of dangerous killers à la Magwitch of Great Expectations, always ready to escape through thick forests and marshes, to unleash yet more havoc and terror on an otherwise stable, peaceful, and God–fearing community of property owners that sees itself as the whole society. It also conjures images of Robben Island political prisoners, Mandela among them, breaking rocks for no purpose other than breaking them. A year as an inmate in Kamĩtĩ has taught me what should have been obvious: that the prison system is a repressive weapon in the hands of a ruling minority to ensure maximum security for its class dictatorship over the rest of the population, and it is not a monopoly exclusive to England and South Africa. ...[mehr] https://lithub.com/in-the-endless-sameness-of-prison-writing-kept-me-human/
Eingestellt von HoHi um 08:41 Keine Kommentare:

Who wouldn’t love to write like Virginia Woolf? (Well, some people, probably, but I’d wager not many of them are looking at this page.) Woolf was a once-in-a-generation mind, and as both a writer and publisher, she had strong opinions about what made a piece of literature great (or, more often, mediocre). Luckily for us, she wrote many of her ideas down, in some of the many essays and letters she penned over the course of her life. Below, I’ve collected a few of Woolf’s thoughts on craft and the art of the novel, as well as inspiring advice for aspiring writers and established writers alike. She is not quite as pithy as others when it comes to doling out advice—but I think her advice is all the better for it.
To write a novel, begin with character:

I believe that all novels begin with an old lady in the corner opposite. I believe that all novels, that is to say, deal with character, and that it is to express character—not to preach doctrines, sing songs, or celebrate the glories of the British Empire—that the form of the novel, so clumsy, verbose, and undramatic, so rich, elastic, and alive, has been evolved. —from the essay “Mr. Bennet and Mrs. Brown" (1924). ... https://lithub.com/essential-writing-advice-from-virginia-woolf/

The Authors and Crimes of Gilded Age New York

Life is often stranger than art and the story of Stanford White and his murder in 1906 seems to belong more to fiction than to fact. Five years before his death, White, the architect who had designed so many of New York’s landmark buildings, had raped a sixteen-year-old chorus girl, Evelyn Nesbit. Nesbit later married Harry Thaw, a millionaire playboy, and on June 25, 1906, as White sat watching a performance of Mamzelle Champagne in Madison Square Garden, a vengeful Thaw fired three shots, instantly killing White.
New York in the Gilded Age and the Progressive Era was a less expansive city and most literate New Yorkers lived and worked in the center of Manhattan, an area no larger than four square miles. This area encompassed Madison Square, Gramercy Park, Greenwich Village to the south and Broadway as far north as Times Square. The wealthy, the Vanderbilts, the Astors and their ilk lived in grand mansions that lined Fifth Avenue as far as 40th Street. Few New Yorkers ventured either to the west side or to the east side of Manhattan without a compelling reason; the docks on both the Hudson River and the East River were dangerous slums inhabited by a transient population and numerous gangs. The events in The Girl on the Velvet Swing all occurred in this central district: the rape of Evelyn Nesbit and the murder of White occurred near Madison Square; Evelyn is a chorus girl in the musical Florodora at the Casino Theatre on Broadway; and Harry Thaw is first arraigned at the Jefferson Market Courthouse in Greenwich Village.

Many novelists and playwrights have made New York their home over the years and the overwhelming majority have chosen to live in Manhattan. No other place in the United States at the time of the murder of Stanford White contained such a concentration of literary talent as those districts near to Madison Square. Here then is a selection of seven writers who were all contemporaries of Stanford White and Harry Thaw and who wrote, to one degree or another, about life in the city: [Henry James, Washington Square; Stepen Crane, Maggie: A Girl of the Streets; Theodore Dreiser, Sister Carrie; Willa Cather, “Paul’s Case: A Study in Temperament”; Edith Wharton, The House of Mirth; William Sidney Porter [O. Henry], The Four Million; James Weldon Johnson, The Autobiography of an Ex-Colored Man] ... [mehr] http://crimereads.com/the-authors-and-crimes-of-gilded-age-new-york/
Eingestellt von HoHi um 08:01 Keine Kommentare: